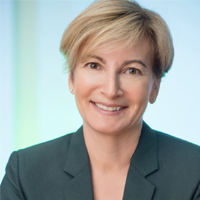 The events of Dec. 6, 1989, had an enduring impact on a generation of women engineers in Canada – in many cases, galvanizing and strengthening their determination both to succeed and to support other women’s success.

For Catherine Roome, who was studying Electrical Engineering at the University of Victoria at the time, the Montreal massacre had a tremendous influence on her career, her outlook and what she decided to pour her energy into – from the moment that it happened and ever since.
“It was a terrible event that happened in 1989, and you have to make a choice about how you respond to something so bad,” says Roome, who graduated in 1990. “That night forever changed and ended 14 women’s lives. It also had a tremendous impact on my life and the lives of so many women engineering colleagues. It was like we started on an irrevocable path that night, to bring a strength we didn’t know we had.”

For Roome, that path has included a stellar career advancing technological innovation and promoting public safety, as well as many prestigious awards and high-level board appointments. What happened at Ecole Polytechnique also spurred Roome and many of her female peers to speak out publicly about their experiences, to find ways to improve the culture of engineering schools and workplaces, and to encourage young women to consider choosing engineering as a career.

“I realized then that promoting women in engineering was going to be my ‘thing’,” says Roome. “This might still have happened later in my career; but because of what happened in Montreal, it happened right at the beginning. And that work has helped change BC’s engineering schools and certainly influenced all the companies I’ve ever worked for.”

In 1990, after graduating and moving to Vancouver, Roome attended an event held by the Canadian Committee on Women in Engineering, where she gave a heartfelt speech about her experiences. At its conclusion, a group of attendees organized themselves into what would eventually become the Women in Engineering and Geoscience Division – part of the provincial Engineers and Geoscientists BC (EGBC). Members of the group began speaking at events, mentoring young women, providing networking opportunities and raising money for conferences.

Today, the group’s original members have job titles that include: principal and founder of an engineering firm; a dean of engineering; the president of EGBC; and Roome, who is President and CEO of Technical Safety BC, the organization that oversees the safe installation and operation of technical systems and equipment across the province.

“Because those 14 young women didn’t have the chance to have their careers – I think maybe we did it for them,” says Roome, “To honour them and their legacy.”

Of course, these achievements didn’t happen overnight. After graduating, Roome secured what she thought was a short-term position at BC Hydro. By the time she left, she was managing assets valued at $100 million and leading hundreds of employees. In 2005, she became Vice President, Engineering at Technical Safety BC, later rising to Chief Operating Officer and, in 2011, President and CEO.

During her tenure, Technical Safety BC has doubled its growth to become a $69-million organization with more than 450 employees. Roome has played a key role in transforming the safety regulator into a modern, knowledge-based organization that uses cutting-edge technologies such as machine learning to advance safety. Two years ago, the organization developed and coded its own artificial intelligence tool that much more accurately calculates the probability of safety hazards likely to be experienced by large equipment, helping to ensure the safety of all British Columbians.

As well as innovation, Technical Safety BC is known for its outstanding culture. In a recent strategic planning exercise, employees identified promoting diversity in all its forms – gender, cultural, physical and cognitive abilities, and an indigenous relations strategy – as key to achieving success in the next decade.

A year ago, when named one of Canada’s Top 100 Most Powerful Women by the Women’s Executive Network, Roome was lauded for her visionary thinking and ability to integrate technology and humanity in order to promote innovation for social good.


Nominated by: University of Victoria