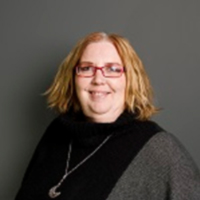 Ruth Eden, P.Eng., was one of five women to graduate from the Civil Engineering program at the University of Manitoba in 1988. Ruth was the first woman to work for the Manitoba Highways and Transportation in the Bridges and Structures Branch.

She has also received a M.Sc. in Structural Engineering from the University of Manitoba. Currently, Ruth Eden is the Acting Assistant Deputy Minister of Water Management and Structures Division for Manitoba Infrastructure. She oversees a staff of 110 responsible for design, construction, inspection, maintenance, and programming for provincial structures on Manitoba highway and water control networks. Ruth has been involved in the design and construction of bridges and structures throughout the Province of Manitoba for almost 30 years. She is on three separate committees of Canadian Highway Bridge Design Code, as well as the executive for the Structures Standing Committee for the Transportation Association of Canada. Ruth Eden was the 2019 President of Engineers Geoscientists Manitoba.


Nominated by: University of Manitoba