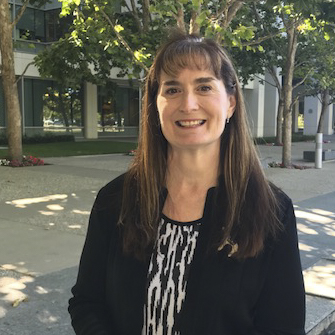 Megan is a senior environmental technical leader and registered professional engineer with a chemical engineering degree from the University of Windsor.

Megan started her career in increasingly responsible roles in the environmental and sustainability field with several multi-national companies. Some of her early career accomplishments include authoring pioneering software to manage air permitting compliance, writing the first sustainability report for a major cement manufacturer, and becoming one of the first internationally certified ISO 14001 auditors, an international system designed to help companies continually improve their environmental performance.

For the last ten years, Megan has worked for Pacific Gas & Electric (PG&E), one of the largest integrated utilities in the United States, headquartered in San Francisco. Her current role at PG&E is Director, Environment, Transmission, where she leads a team of 110 technical professionals in managing the environmental footprint of the company’s gas and electric transmission portfolio is the highly complex California regulatory environment. Her responsibilities include managing an annual budget of $120 million while ensuring the company’s operations function with as minimal environmental impact as possible while preserving habitat for California’s multiple endangered species. “We try to work with as little impact to the environment as we can, and if possible, try to improve it,”, she says.

Additionally, Megan directs the company’s environmental response during emergencies, such as the 2014 Napa Earthquake and the 2017-18 Northern California Wildfires. Her work has led her to developing relationships with a wide range of stakeholders, from government agencies, to non-profit organizations, to environmental activists. “At first, these groups seem like they would be at odds in many conversations,” she says. “However, they have a lot more in common than they think. We’ve managed to get a lot of things done once we find those common areas.”

Megan has been a passionate proponent for gender equity in the profession. “There are too many times when I’m in a meeting and I look around and I’m the only woman in the room,” she says. “So I’m doing everything that I can to change that.” To that end, Megan is a senior life member and former Board of Directors member of the Society of Women Engineers, and currently serves on their ethics committee. Megan is also on the Advisory Board for the W-STEM Group at PG&E, a group dedicated to increasing the number of women in STEM fields, and leads another technical women’s group targeted to women in environmental and sustainability. She also serves on the Board of Directors the for National Association of EHS Management (NAEM) as their Second Vice President.

On a personal level, as an advocate for increasing female gender representation in the engineering field and supporting future engineers, Megan established an endowed a scholarship in memory of her grandparents at the University of Windsor. The Frances and Gordon Halfpenny Memorial Scholarship empowers women engineers, supporting female undergraduate students in civil and environmental engineering.


Nominated by: University of Windsor